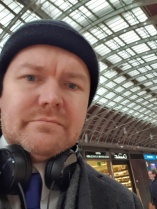 Another year another BETT and guess what?  Once again, I failed to learn from experience and decided to make my way down via train and once again it went wrong.  This time it was simply my first train being late leading to me missing my connecting train.  This had the same concertina impact as I experienced last year leading to me rushing around.  Maybe next year I will learn?   Third time lucky?

On top of this, as I was visiting the EdTech Conversations event at the London Design and Engineering UTC first, I found that the google location for the venue actually took me the wrong way.  Thankfully some helpful students were on hand to assist and point me in the correct direction plus we had a good chat regarding the architecture course the two lads were studying.   One consolation was that at least I decided to take the DLR to the event rather than choosing to do what Ty Goddard had suggested was a 10min walk from BETT to the UTC;   Clearly according to a few audience members who had accepted Ty’s guidance, the walk was significantly more than 10mins.

Now my reason for being at the EdTech Conversations event was to present on School Tech Strategy.   On reflection I think my session was a little bit of a rambling so I must admit to being disappointed with myself.   In addition, I had technical issues with my wireless pointer, something which I should have checked before setting out.    That said, I hope those in attendance understood what I believe to have been my main point in the need for all schools, educators, support staff, etc to work together more, share their experiences, ideas and thoughts and take a more collective approach to education in general.   We all have different views, ideas, experiences, contexts, etc and together we are infinitely stronger than trying to go it alone and often re-invent the wheel. 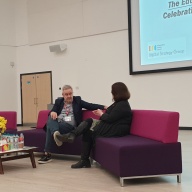 In terms of the other speakers, who presented in a more professional and polished manner than myself, I found Emma Darcy and her discussion with Ty very interesting discussing. I particularly liked her mention of preparing students for “jobs of the future” which fits with my views in the needs to do more in relation to digital citizenship.

I think my highlight from the event would be Laura Knight who despite expressing she didn’t quite agree with my “journey” idiom, went on to say so many things I agreed with.    I loved her focus on the human aspect of strategy in presenting her EdTech leader superpowers and the need to be ambitious, fearless, to find simplicity and to be relentless.    I think the human aspect of EdTech and of strategy in general is often overlooked but given it is people who generally enact strategy we should in fact have people at the forefront of thinking.

Also, another highlight was Mark Steed.  Now I have heard mark speak on a number of occasions, but his 6 lessons were particularly interesting.   Like Laura Knight he mentioned the need to focus on people, adding to this regarding a focus on training.   He also highlighted that although his strategy appears to have been very successful it wasn’t without errors.  I think this is an important message in that in reviewing others strategies and approaches it almost always looks like a straight line; they were here then did X and Y and got to there.   The reality thought is that there would likely have been lots of wrong turns, mistakes, problems so its more like they did A, B, C, D, E and A and B didn’t work, C had to be adjusted and became F, and eventually they got to X and Y and success.   I think this is what I was trying to get across with my journey idiom however I don’t think I was successful in this.

Overall the EdTech Conversations event was fun and useful, and I look forward to more discussion-based events like this in the future.

As to BETT, after all my rushing around I only ended up with a couple of hours in BETT so can only offer a rather superficial view.   Sadly, this view is that the event generally seemed very much the same as it has in every year I have attended since returning to the UK.   If you had a specific stand or vendor to see, then it would be useful but if you are seeking to browse or to find innovative ideas then I think you would have been disappointed.   This at least was my initial view on reflecting having returned home.     A few days have passed this then I have reflected a bit more and I can see how BETT can be seen as very worthwhile now.   It isn’t in the EdTech conference which the event is, or in the stands of technology vendors.    The strength in BETT lies in the fact the event draws educators and EdTech leaders from across the country and across the world together for 4 days and in the networking this brings.    On hindsight, even in my brief visit, I ended up at one stand where I had conversations with a number of EdTech leaders and as a result came away with plans to connect further and explore ideas and also issues and problems.   But from this comes a question: Can we stimulate the same networking opportunities without the massive cost to vendors to be present at an event like BETT?  A cost they ultimately pass on to their customers; schools.

One thought on “EdTech Conversations and BETT 2020: Reflections”