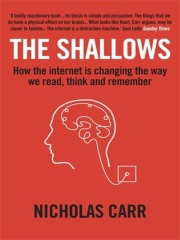 Within the third chapter of the book Carr discussed the “tools of the mind” looking at a number of tools such as the pocket watch and the printed book and how these technologies were viewed as disruptive at the time however have since become considered as normal.     I find this to be an interesting discussion as it may be that looking at things now we are not able to appreciate how things may be and therefore may be quick to judge on something we do not fully understand.   This reminds me of the phrase “we don’t know what we don’t know”.     It also gets me thinking about the story of the young child asking about his fathers watch.   “What does that do?” asked the child, or so the story goes.    “It tells the time”.   “What else does it do?” replied the child.     This seems to indicate that change is already well underway as a young child doesn’t understand a wrist watch which just tells the time in a world of devices which are fitness monitors, cameras, Dictaphones, information stations and a phone.

Carr goes on to discuss how the internet is changing the way we think discussing at some length the issue of shortened attention span which is often raised in discussions as to the impact of technology on children.  His suggestion of technology as an extension of our existing abilities was one I found interesting and which aligns with another books I read focusing on Google, although I cannot remember the specifics of the title.    Given this and technologies ability to augment our memory, or knowledge, we therefore do not need to remain focused for long periods of time poring over a book in order to learn the content.   As a result we have more time to tackle multiple different tasks and be creative, which could be viewed as a positive to oppose the negative of the reduced ability to remain focused for longer periods of time.      Carr raises the issue of farm workers and more advanced tools and how they become more efficient through using tools however this may result in less application and therefore development of their bodily strength, which would have once been key to the ability to do the work in hand.     I think about cars which now allow us to get around quickly and easily however as a result we are not as fit as we once were.   Would we give up our cars to be fit again or are the efficiency gains now too important to lose?

All in all, The Shallows in an interesting book to read which is largely well balanced with viewpoints from both sides of the for and against technology camps although the overall mode from the book did feel to me to be more pro-technology than against.    I think it is a very worthwhile read and provides some new insight into the changing world, drawing some interesting comparisons with disruption technologies advances from days past.